I turned off my Apple Thunderbolt Display for the day and was a bit distressed to see all this crazy stuff inside the screen. 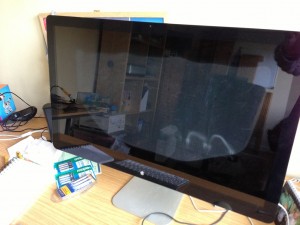 Most of the stuff is condensation [ which is bad enough ] but the funny curvy shapes must be from condensation in the past that has dried and left water marks. I’d spotted the water marks when using the display, they were clearly visible above white pages. I immediately got in touch with Apple since the monitor was less than twelve months old. I described the whole problem to some helpdesk guy in Ireland who took my serial number, tried to sell me some Apple Care package, tried to sell me something else and then promised to send me a list of things to try that might fix the problem. He sent me an e-mail about resetting the PRAM on my MacBook Pro. This is worth repeating. To solve watermarks on the inside of an Apple Thunderbolt Display he suggested resetting the PRAM on my laptop. The guy was, and probably still is, an idiot.

Putting Apple Helpdesk idiocy to one side I searched the internet for a solution. Turns out it’s remarkably simple. Take one child’s suction cup toy thingy, rip off the “glass” front of your monitor from the magnets holding it in place, give it a bit of a wipe and then reattach the front “glass” to the monitor with the built in magnets. People waffle on about doing it in clean room conditions but if you get some dust in there then pull the front off, clean it again and then put it back again. You’ll get there eventually.